Both Minnesota and TCU claim a national title from 1935. Let's examine each team's merits and then fight this one out in the comments.

Share All sharing options for: Minnesota Football: WHO IS THE REAL #1 FROM 1935? #TBT

Four teams actually lay claim to 1935, Minnesota, Princeton, SMU, and TCU. For today's purposes we are excluding Princeton (because they nerds), and SMU (as a retroactive punishment for harboring Craig James #CJK5H). So let's look at the two teams left.

The Argument for Minnesota: 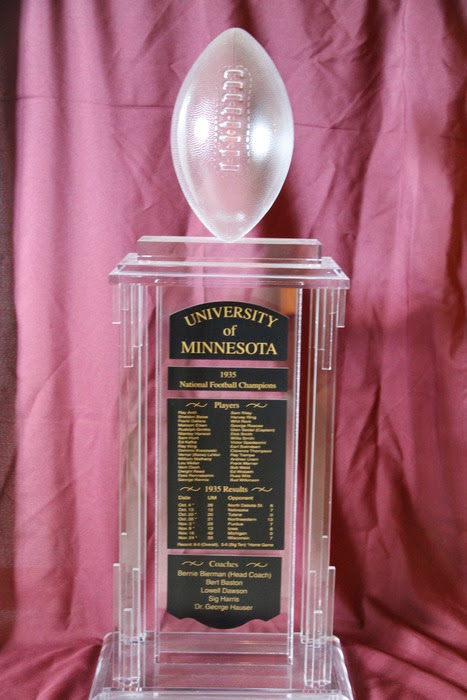 Replica 1935 trophy, recently won at auction by the one and only @KevinZintheTC

The Golden Gophers ended 1935 with their third straight undefeated season. Going 8-0 thanks to All-Americans linemen Bud Wilkinson, Ed Widseth and Dick Smith. Bernie Bierman's 1935 season would the second of three consecutive championships. Playing against three UPI ranked teams (#24 Nebraska, #18 Northwestern, and #22 Iowa) they outscored all opponents 194 to 36. Every major poll would rank the U of M as #1 at the end of the year.

Highlights from Minnesota's win over Northwestern (apologies for the shitty watermark).

The Gophers trophy game was strong in 1935.

A Haters View of Minnesota's Title:

Not playing in a bowl game hurts Minnesota in hindsight. It was a choice Minnesota made not to go. Bierman didn't want to risk his perfect record and the Regents probably wouldn't have let him go to the Rose Bowl even if he did. The Dinkytown shade blockers of the 1930s saw bowl games as meaningless exhibitions with the sole purpose of making money. huh. So the Gophers are left without being challenged by anyone outside of the Midwest.

The Argument for TCU:

To read a full recap of the Frogs 1935 season holler at this Frogs o War article. All-American QB Sammy Baugh led Texas Christian undefeated into it's game with SMU. Grantland Rice called the TCU-SMU match up the "game of the century". While the Frogs lost, they would go on to beat LSU 3-2 in the 1936 Sugar Bowl. With SMU losing the Rose Bowl to Stanford the Williamson System crowned TCU #1.

A Haters View of TCU's Title:

The Williamson System, developed by geologist and Sugar Bowl committee member Paul Williamson, has widely been mocked as the worst power rankings system in the history of college football (at least by this guy, on the internet).

Highlights from the 1935 SMU win over TCU. Some narration after the 1 minute mark.

No amount of homerism would allow me to risk one of Bernie's titles on the outcome of today's game, so we'll have to settle this on the internet. Best comments wins their team a retroactive title.