It's Golden-I Is Invincible vs I've Got A Fever!

Meme Madness has reached the Final Four stage. In a slight surprise to me, there were no upsets or quasi-upsets in the last round as all the top seeds advanced. Before we get to our first match-up, a quick reminder that the voting will be open until 8pm on Wednesday night.

I've Got A Fever stole the champagne away from Dumb & Dumber, defeating the tuxedo wearing pair 69% - 31%. 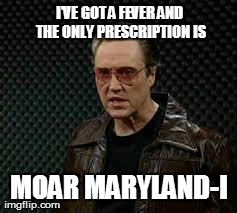